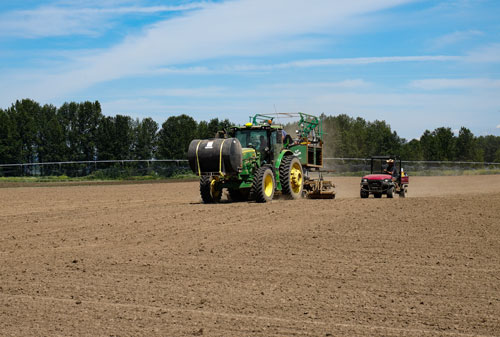 Under the 2018 Farm Bill, the United States Department of Agriculture put in place a system by which each state can register to have a legal industrial hemp program. This opened the door for every state to individually decide to create the infrastructure necessary to enter the industrial hemp market. Because the gateway was opened without a concise mandate at the federal level, it can be difficult to keep track of the varying hemp laws in each state. So, we thought we’d help condense the information and make it easier for farmers and potential hemp enthusiasts to learn where and how hemp can be grown legally. (3)

First up, Michigan. The Great Lakes State has become quite hemp-friendly since the passing of the Farm Bill and is working on streamlining the registration and growing processes both for statewide and interstate hemp commerce. (3)

Michiganders are some of the newest to the industrial hemp industry, but they are a force to be reckoned with. In 2015, Governor Snyder of Michigan signed a bill that separated the legal definitions of hemp and marijuana, setting apart industrial hemp and allowing it to be cultivated for research. This is set into motion the trajectory that led to the state’s accessibility to the hemp market as a whole (4). While states such as Colorado and Oregon began their agricultural pilot programs to research Industrial hemp as early as 2009 and 2010, Michigan quickly caught up.

On December 28, 2018, Governor Rick Snyder signed Michigan House Bills 6330, 6331 and 6380 (Public Acts 641, 642, and 648 of 2018) into law. This amended the Industrial Hemp Research Act that was previously in place in the state, now allowing anyone over the age of 18 to register to grow industrial hemp. All growing, processing, and handling of industrial hemp will be regulated by the Michigan Department of Agriculture and Rural Development (MDARD). (2)

In order to grow hemp in Michigan, farmers must register with the MDARD. This will allow the state to facilitate a healthy and ethical hemp industry. Furthermore, a program is in development now that will implement guidelines for the interstate trading of hemp in congruence with the requirements of both state and federal laws. (3)

The Industrial Hemp Research and Development Act (IHRDA) limits application fees for growers to $100, and $1350 for processor-handlers. The statute also states that the applicants must disclose the names of all corporate members and those with equitable holdings of 10% or more in each given business, allowing systemic regulation from both agricultural and economic standpoints. (5)

The IHRDA also states that growers may not plant industrial hemp in the midst of a crop that is not industrial hemp. Industrial hemp must be on its own plot of land (5). Another rule stated in the Act says that any hemp crop that contains higher than the allowed .3% TCH content will be classified as Marijuana and dealt with as such under Michigan law. (3)

It is now legal in Michigan to grow industrial as long as you abide by all the laws stated in the legislation. The attitude toward this beneficial industrial crop is coming overwhelming positive in the state. In fact, under the new legislation, Michiganders may even have criminal charges involving small-scale possession of cannabis expunged from their records. (1)